The drone has the characteristics of small size, light weight, flexibility, low cost, etc. It can be used for photographing of ground reconnaissance, and can also be widely used in military reconnaissance, geological exploration, and survey and prediction of dangerous areas such as fires. It is very important to build a network video system on the human machine. Based on PC104-based drones, this paper constructs a network video system. The acquisition, compression, decompression and transmission of drone video data are the key technologies in the UAV network video system. Several key issues are studied.

The lower position machine of the system is mainly composed of PC104 industrial computer of Shenzhen Sunda Company, MP camera (USB interface) of Logitech Express space version, USB router of linksysWRT54GC-CN and peripheral circuits. It adopts embedded Linux 2.4.26 operating system and is mainly responsible for Video data is collected, compressed and sent to the host computer. The host computer is a PC computer containing a wireless network card. It is mainly responsible for receiving, decompressing and displaying video data. The upper and lower computers transmit data through UDP/IP network protocol. The socket network programming can realize network interconnection and data transmission and reception.

MB, provides 2 RS 232 serial interfaces, 2 USB ports, 1 parallel port, floppy disk drive interface, IDE hard disk drive, 10/100 Base-TX Ethernet interface, CRT/LCD display interface and SSD socket, supports DiskOnChip 8 to 288 MB. The operation and use of the PC104 industrial computer is the same as that of the PC. After the system hardware is installed, the BIOS can be turned on for BIOS setting. The input voltage must be +5 V, and the fluctuation range should not exceed 5%.

Video4Linux (V4L) is the kernel driver for video devices under embedded Linux. It provides a series of interface functions for video devices under Linux. In the stage of compiling and configuring the kernel, you must add support for V4L modules and USB camera driver modules. For the USB interface camera, the driver needs to provide the basic I/O operation functions open, read, write, close, the implementation of the interrupt, the memory mapping function and the implementation of the control interface function ioctl for the I/O channel. Etc. and define them in the struct file operaTIons. Thus, when the application makes a system call operation such as open to the device file, the Linux kernel will access the function provided by the driver through the fileoperaTIons structure. Drive the USB camera on the system platform, firstly compile the USB controller driver module into the kernel statically, so that the platform supports the USB interface, and then use the insmode to dynamically load its driver module when you need to use the camera to capture, so that the camera can be normal. Already working.

After the USB camera is driven, the video data acquisition can be realized by programming several video acquisition related data structures supported by Video4Linux. Figure 1 shows the flow of video data collection under embedded Linux: 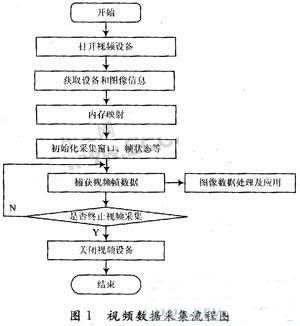 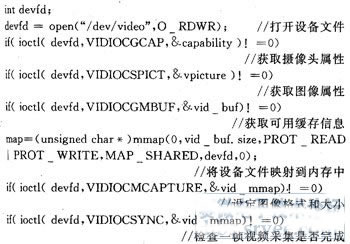 Use the ioctl (devfd, VIDIOCSYNC, & vid_mmap) function to determine whether an image has been intercepted. A successful return indicates that the interception is complete, and then the image data can be saved as a file. In order to obtain a continuous frame video image, the number of times the camera frame buffer frame data is collected and looped may be determined by using the vid_buf.frames value on a single frame basis. In the loop statement, each frame is also intercepted using the VIDIOCMCAPTURE ioctl and VIDIOCSYNC ioct1 functions, but to assign an address to each captured image, use the statement buf=map+vid_buf.off-sets[frame], and save it as a file. form.

The lower computer of the UAV system requires real-time transmission of video data to the host computer. Since the amount of video data is large and the network bandwidth is very valuable, it is very important to select a file format with high compression ratio for video data. JPEG is the English abbreviation of Joint Picture Expert Group. It is a compression coding standard for static images jointly developed by the International Organization for Standardization (ISO) and CCITT. Compared to other common file formats of the same image quality (such as GIF, TIFF, PCX), JPEG is currently the highest compression ratio in still images, but the image quality is similar. It is because of the high compression ratio of JPEG that he is widely used in multimedia and network programming. 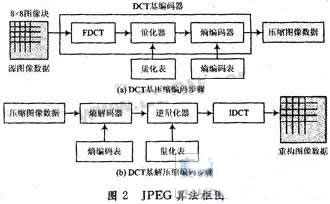 (1) Data redundancy is removed by DCT. DCT is an important step in image compression. It transforms an image from a spatial domain to a frequency domain by orthogonal transform. For N&TImes; N-dimensional data, NÃ—N data is still obtained after transformation. Although the DCT transform itself does not compress the image, the transform eliminates the redundancy between the NÃ—N-dimensional data. The DCT transform is the basis for quantization and coding in the compression process.

(3) Encode the quantized DCT coefficients to minimize their entropy. After the DCT and quantization of the remote sensing image data, a large number of consecutive zeros appear in the high frequency segment, and the Huffman variable word length coding is used to minimize the redundancy.

The UDP protocol is a connectionless protocol, the message exchange is simple, and there is no multiple acknowledgment mechanism, thereby reducing the huge overhead required to establish a connection and remove the connection. Each packet carries a complete destination address and is transmitted independently in each packet system. He does not guarantee the sequence of packets, and does not perform packet error recovery and retransmission. Therefore, transmission reliability and quality of service cannot be guaranteed. However, compared with the TCP protocol, the UDP protocol reduces operations such as acknowledgment and synchronization, which saves a lot of network overhead. He is able to provide high-transmission efficiency datagram services, enabling real-time data transmission and widespread use in real-time data transmission. In order to ensure the real-time performance of drone video data transmission, IP protocol and UDP protocol are adopted as the communication protocol of the system.

The software implementation of the network transmission part of the system adopts the socket (programming) programming technology. The system calls the socket() function to return an integer socket descriptor. The video data transmission is realized by the socket function. Commonly used socket types correspond to two types of transport protocols: streaming sockets and datagram sockets. The former uses the TCP protocol, the latter uses the UDP protocol, and the system uses a datagram socket. The following is the main implementation of the socket programming of the lower computer: 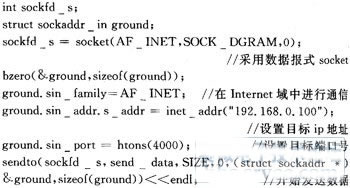 This paper mainly introduces a video system construction method and process based on PC104 drone. Taking PC104 industrial computer as the main hardware platform, it completes the detailed introduction and software design of the process of capturing, compressing and transmitting video data of camera. The network UDP/IP network transmission protocol and socket programming transmit video data, which guarantees a certain degree of real-time performance, and can meet the application of the UAV geological exploration, fire reconnaissance and other fields.

Yeswitch Car Light, namely Automotive Light. Its Led Automotive Light are including Off-road lights, Headlights, dome light, Driving light, etc. Normally, our Car Light, Car Fuse and Automotive Switches and other automatic accessories are the necessary accessories of a car. The combination headlights are at the front of the car, which primarily functions as a light source and signal. The light from the headlights illuminates the road ahead of the car, allowing the driver to drive safely in the dark. 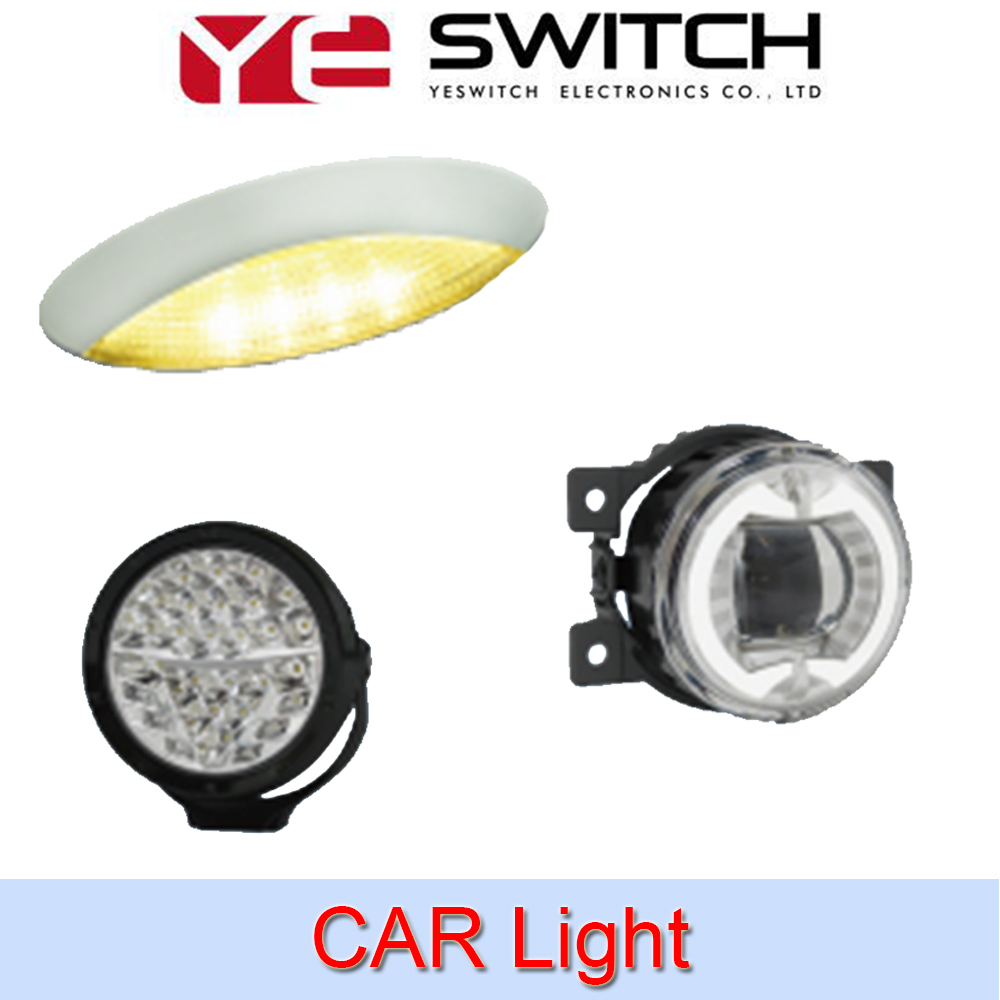 Light Emitting Diode, referred to as LED, Chinese name is LED. The LED Car Light, strip refers to the assembly of the LED on a strip-shaped FPC (flexible circuit board) or PCB hard board. The name of the product is named like a tape.

Fog light is installed at the front of the car at a position slightly lower than the headlights, and is used to illuminate the road when driving in rainy and foggy weather. Because of the low visibility in the fog, the driver's line of sight is limited. Light can increase the running distance, especially the yellow anti-fog light has strong light penetration, which can improve the visibility of the driver and surrounding traffic participants, so that the car and pedestrian can find each other at a distance 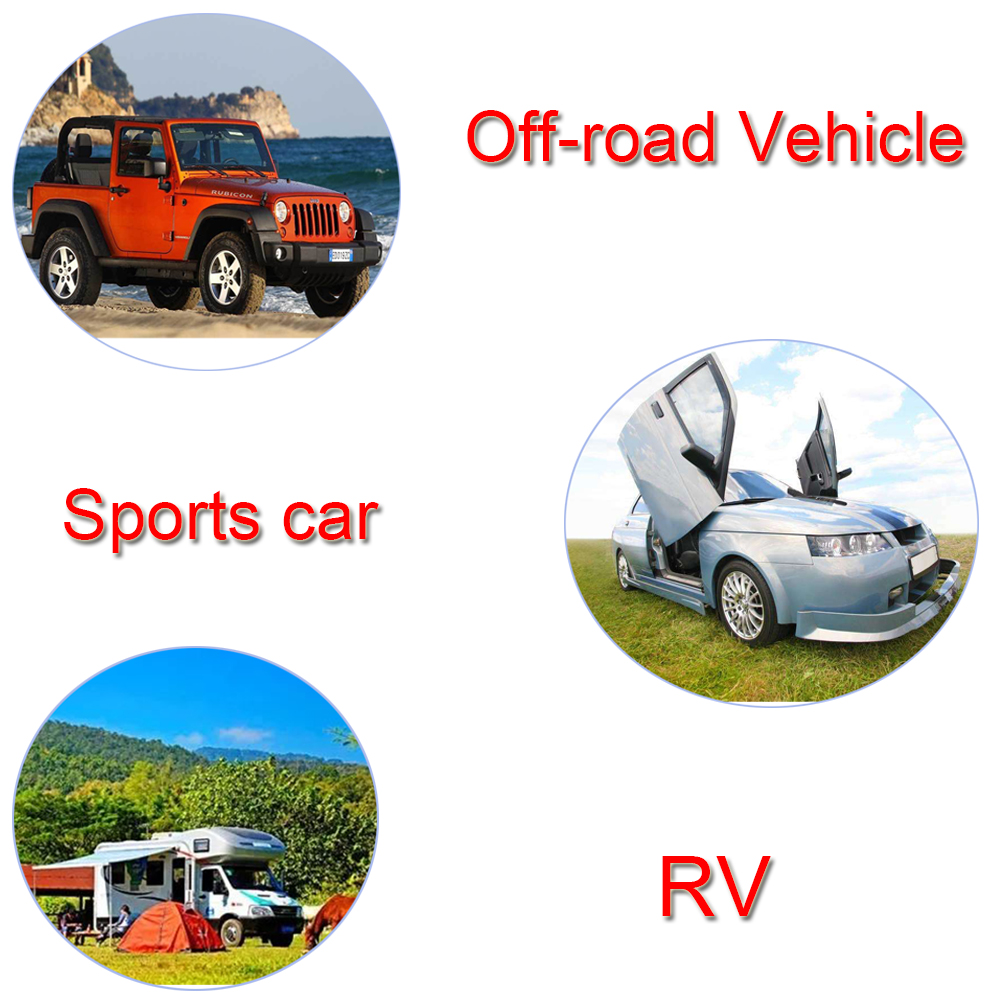