At present, unmanned aerial vehicles mainly fly in the lower troposphere and stratosphere. The atmospheric temperature changes in this interval are complicated, and the temperature of the atmospheric environment is too low or too high, which will directly affect the normal operation of the UAV control system. Since the unmanned aircraft fuselage needs more temperature detection parts and the monitoring targets are scattered, it is difficult to grasp the whole body surface and the temperature condition in real time and comprehensively by using a single structure temperature sensor or icing detecting instrument. Therefore, the design combination has been Some civilian multi-channel temperature measurement technology, proposed a multi-channel temperature inspection system based on FPGA for temperature detection and functional affairs management of various parts of the unmanned aircraft fuselage. The system can periodically monitor the temperature conditions of various parts during the flight of the unmanned aerial vehicle, so that the icing temperature that may occur in the airframe can be detected early and an alarm signal is sent to the system to fly the aircraft away from the icing area or open in time. De-icing design to achieve flight safety.

2. The overall structure of the design

The block diagram of the unmanned aerial vehicle temperature inspection device is shown in Figure 1. 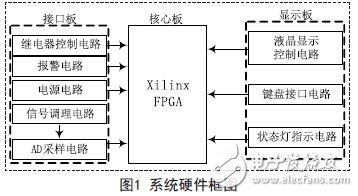 This design uses FPGA as the core chip. After the power supply circuit is powered, the signal conditioning circuit uses the platinum resistance sensor PT100 to amplify the collected voltage signal through the amplifier and send it to the A/D sampling circuit. The A/D sampling circuit converts the analog signal into The digital signal is sent to the FPGA for processing. After processing the data, the FPGA automatically sends the processing result through the liquid crystal display and compares it with the value set by the keyboard circuit. If the set value is exceeded, the FPGA sends a signal to make the buzzer circuit The alarm, the relay circuit responds, and the heating device is activated. Figure 1 shows the overall block diagram of the system.

According to the functional requirements of the system, the hardware circuit of the device is divided into a signal conditioning module, an A/D sampling module, and an FPGA minimum system module according to its functions.

The system uses a Wheatstone bridge to connect the platinum resistance sensor PT100 signal, as shown in Figure 2. 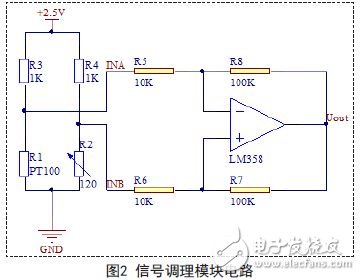 In Figure 2, the difference between INA and INB is linear with the change of PT100 resistance. The measured temperature can be converted by sampling the change values â€‹â€‹of INA and INB and then corresponding to the platinum resistance sensor P100 scale. Considering that the signal generated by the platinum resistance sensor PT100 probe is very weak and is susceptible to noise interference, the amplifier circuit selects the instrumentation amplifier composed of a single operational amplifier. The instrumentation amplifier has a differential structure that has a strong rejection of common mode noise, a high input impedance and a small output impedance, making it ideal for amplifying weak signals. In Figure 2, R3, R4, R5, R6, R7, and R8 all use precision resistors with low temperature drift, and R2 is a multi-turn precision adjustable resistor. Through the circuit can be calculated:

It can be seen from equation (1) that the gain can be changed by increasing or decreasing the resistance of R8 to obtain an ideal amplification factor.

Deluxe Rice Cooker was one of electric type rice cooker  , but it`s the most popular type of electric rice cooker . especially famous in Southeast Asia area with its good appearances with various functions. Not only its outer shell could be customized with different demands, but also it speeding cooking  , saving times and electricity, enhancing our lifestyle

The inner pot is made of solid and durable aluminum alloy of high intensity  , such as non-stick inner pot , stainless steel inner pot and honeycomb patterned inner pot with non-stick coating.

There are some models that use stainless steel instead of aluminium  .Various other materials, such as copper, pure carbon, ceramic, and diamond powder coating, may be used for higher heat conductivity or better taste.

Some rice cookers have settings for congee, a type of rice porridge called okayu in Japanese, Juk in Korea, and zhou in Chinese.

More elaborate recipes are possible using a rice cooker, and there are cookbooks devoted entirely to dishes prepared using a rice cooker. It is possible to cook soups, stews or sponge cakes in electric rice cookers. By simply adding ingredients and setting it to "warm", a rice cooker cooks the contents at about 65 Â°C (150 Â°F). In a few hours, the stew is fully cooked and ready to eat.