The main work of this process is to make circuits and electronic components (such as transistors, capacitors, logic switches, etc.) on the wafer. The processing procedure is usually related to the product type and the technology used, but the general basic procedure is to first properly apply the wafer. After cleaning, oxidation and chemical vapor deposition are performed on the surface, and then repeated steps such as coating, exposure, development, etching, ion implantation, and metal sputtering are performed, and finally, several layers of circuits and components are processed and fabricated on the wafer.

After the previous process, a small grid, ie, a die, is formed on the wafer. Generally, in order to facilitate testing and improve efficiency, the same type and specification of products are produced on the same wafer; Need to make several products of different varieties and specifications. After measuring the electrical characteristics of each die with a probe, and marking the unqualified die, the wafer is cut into individual grains and then electrically characterized. Classification, loading into different trays, and rejecting unqualified grains.

That is, a single die is fixed on a plastic or ceramic chip base, and some lead terminals etched on the die are connected with the pins protruding from the bottom of the base to be connected to the external circuit board. Finally, cover the plastic cover and seal it with glue. Its purpose is to protect the crystal grains from mechanical scratches or high temperature damage. At this point, we have made an integrated circuit chip (that is, those black or brown that we can see in the computer, rectangular blocks with many pins or leads on both sides or four sides).

The last process of chip manufacturing is testing. It can be divided into general test and special test. The former is to test the electrical characteristics of the packaged chip under various environments, such as power consumption, running speed and pressure resistance. The tested chips are classified into different grades according to their electrical characteristics. The special test is based on the technical parameters of the customer's special needs, take some chips from the similar parameter specifications and varieties, and do specific tests to see if they can meet the special needs of customers to decide whether they need to design special for customers. chip. Products that have passed the general test are affixed with labels of specifications, models, and date of manufacture, and are packaged and shipped. Chips that fail the test are classified as downgrades or scraps depending on the parameters they reach. 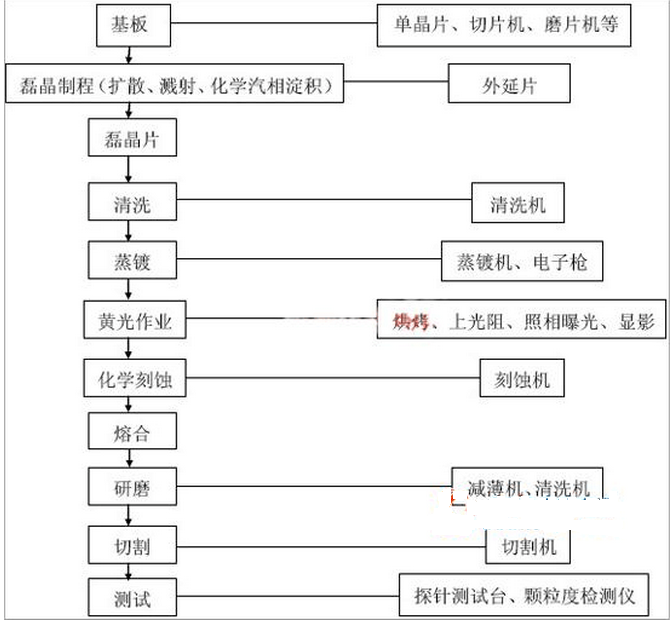 1. Test the voltage, wavelength and brightness mainly. The wafer that meets the normal shipping standard parameters will continue to do the next step. If the nine-point test does not meet the relevant requirements, the wafer is placed on one side. deal with.

3. The chip is then fully automated, selected, tested, and classified using a fully automated sorter based on different voltage, wavelength, and brightness prediction parameters.

4. Finally, the LED chip is inspected (VC) and labeled. The chip area should be at the center of the blue film. There are up to 5,000 chips on the blue film, but the number of chips on each blue film must be no less than 1000. The chip type, batch number, quantity and photoelectric measurement statistics are recorded on the label. Attached to the back of the glossy paper. The chip on the blue film will be the same as the first visual inspection standard, ensuring that the chips are neatly arranged and of good quality. This makes LED chips (currently known as square chips on the market). In the process of manufacturing the LED chip, some defective or electrode-worn chips are separated, which are the latter crystals. At this time, there are some wafers on the blue film that do not meet the normal shipping requirements. Become a side piece or a piece of hair.

Just mentioned that nine points are taken at different positions on the wafer for parameter testing. For wafers that do not meet the relevant requirements, these wafers cannot be directly used as LED squares, and therefore do not do anything. After the inspection, it was sold directly to the customer, which is the LED wafer on the market (but there are also good things in the big wafer, such as square chips).