The light environment in which crops grow is the most important factor affecting crop photosynthesis and directly affects crop growth and health. The artificial light sources used in the agricultural field for a long time mainly include high-pressure sodium lamps, fluorescent lamps, metal halide lamps, incandescent lamps, etc.; the outstanding disadvantages of these light sources are high energy consumption and high operating cost. The application of LED in agriculture and biology has shown great vitality. LED light source can save a lot of energy while meeting the photosynthesis needs of plants.

Based on the analysis of the light sources used in the growing environment of crops at home and abroad, this study intends to focus on the environment of LED light sources that affect the growth state of crops; through the environment of artificial light plants growing in greenhouses, in different light quality and light intensity Under the action of illumination time, the correlation between a series of growth states of crops was studied [1]; BP neural network technology was used to self-learn and adapt the light parameters of plant growth process, and based on LED light source and BP neural network technology The crop grows in a light environment. BP (Back Propagation) network is a multi-layer feedforward network trained by error reverse propagation algorithm. It is one of the most widely used neural network models. In recent years, the powerful nonlinear mapping ability of BP neural network has made it widely used in agricultural research.

This research is mainly based on the idea of â€‹â€‹applying LED light source in agriculture to build an environmental system, so that the functions originally realized by manual methods are realized by computer, to achieve better results and save resources. The overall composition of the environment includes crop growth experimental areas, LED light source equipment, data acquisition and computer equipment.

The technical route of this study is shown in Figure 1: 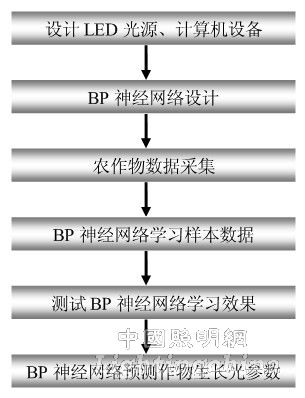 The plant growth lamp control circuit of the LED light source comprises a microprocessor, a memory, a timing module, a pulse width control module, a drive module and a communication module, wherein the communication module is connected to the computer. The light environment control device adopts intelligent control, and the board surface is composed of red LEDs and blue LEDs, and the luminous intensity of red light and blue light is designed according to the demand of light for plant growth. The luminous intensity of the light source adopts the PWM (Pulse Width Modulator) control method to control the luminous intensity of the red and blue light sources of the light environment control device to meet the requirements of different plants for the light environment. Different red and blue ratios can be set by adjusting different duty cycles [3]. LED not only has the advantages of small size, long life, low energy consumption, fixed wavelength and low heat generation, but also accurate configuration of luminescence spectrum according to plant needs; energy saving, environmental protection and space efficient utilization that cannot be replaced by traditional light source [ 4].

The main function of the computer equipment is access to a series of data of the collected crops and procedures for running the BP neural network. The development of agriculture increasingly requires real-time data and information, and requires reliable information about agricultural data and precise predictive control. These are not guaranteed by manual methods and must be implemented by computer data acquisition, purposeful data processing and analysis, and integrated prediction systems. Computer information technology is comprehensively reformed and equipped with agriculture, and full computer technology serves agriculture. Digital design, intelligent control, precise operation and scientific management of various elements of agricultural production can greatly reduce agricultural consumption and reduce production costs. Improve the efficiency of agricultural production.

The BP network is a unidirectional forward multi-layer forward network. It is a neural network with three or more layers, including an input layer, an intermediate layer (hidden layer), and an output layer. A full connection is achieved between the upper and lower layers, and there is no connection between each layer of neurons. When a pair of learning samples is provided to the network, the activated values â€‹â€‹of the neurons propagate from the input layer to the output layer through the intermediate layers, and the neurons in the output layer obtain the input responses of the network. Next, according to the direction of reducing the target output and the actual error, each connection weight is corrected layer by layer from the output layer through each intermediate layer, and finally returns to the input layer. As the error correction of this error inverse continues, the correct rate of response of the network to the input mode is also increasing. The data prediction problem of the general model, the three-layer network can be well solved [5].

The input information of BP neural network in this paper is the growth characteristic data of crops under the growth environment of LDE light source, mainly including light data and trait data of growth period. Different crops adopt specific different growth characteristic data. The number of hidden layer neurons is variable, and there are enough hidden units to learn to remove those hidden units that are not working until they are not shrinkable. The output of the neural network is the yield per unit area of â€‹â€‹the crop.

A series of input and output data sets are provided to the neural network. Through the numerical calculation method and the parameter optimization technology, the connection weights of the node connections are continuously adjusted until the desired output can be generated from a given input. Let the input layer i nodes correspond to i input components respectively, the input vector is x=x1,...,xi; the output layer k sections, corresponding to k output components Y=(Y1,...,Yk); hidden layer The number of neurons is j; the input layer to hidden layer unit connection weight is Wij; the hidden layer to output layer unit connection weight is Vjk [6]. The neural network learning process includes two iterative processes of information forward propagation and error back propagation. The network adaptively and self-organizes according to the input training (learning) samples to determine the connection weight and threshold of each neuron. After many trainings, the network has the ability to remember and associate the learning samples.

Use a trained network to predict unknown samples. The neural network learns the sample data, inputs the light environment data of the learning sample and the crop growth data to obtain the output of the established crop yield data, and also obtains the expected output when inputting the test sample data. At this time, the BP neural network can be used to predict the growth of crops under the LED light source environment, and set the optimal light source parameters according to the predicted data, so that the growth light source environment of the crops achieves the desired effect. 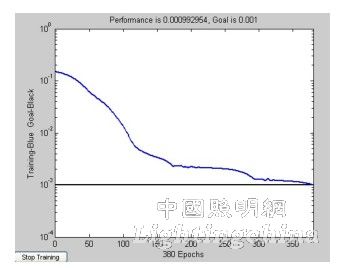 When the BP network trains the sample data, it uses the steepest descent method to continuously adjust the weights and thresholds of the network through backpropagation to minimize the sum of squared errors of the network. The trained BP neural network was validated, and 100 test samples were taken as the input of the neural network, which can correctly predict the crop yield ratio of 90.37% and the test time of 4.75s.

Table 1 shows the test results of some test samples. Because the sample data is different, the simulation results are different; in general, the average error is small and within the acceptable range.

The application of LED light source in agriculture is the comprehensive application of knowledge of many fields such as wavelength analysis technology, computer technology and BP neural network technology in crop production management. It is a new multi-disciplinary combination of agricultural information and computer science. Research topics.

1) BP neural network has the ability of self-learning and self-organization; as long as the experimental data is provided to it, people can automatically establish the relationship between input and output, thus saving the experimental selection of the light parameters required by different crops. Time is simple and efficient.

2) The BP neural network method can achieve higher reliability and practicability; it is effective for improving the prediction accuracy of light environment parameters and reducing the error rate. The light parameters required for different growth periods of the same crop can be further improved. Accurate prediction saves a certain amount of resource consumption.

The BP neural network algorithm is actually a gradient algorithm for nonlinear optimization problems, so there is a convergence problem; the algorithm cannot guarantee that the learning result will converge to the global minimum point of the mean square error, which may fall into the local minimum point, causing the network to fall into Wrong working mode. This study also guarantees the accuracy of running the program under the premise of ensuring the speed of the algorithm. However, it is still necessary to further explore and explore new ideas for the problems encountered in BP neural network. This study can provide a basis for computer science management and decision-making in agricultural production, especially in the environment of controlled light source, which is of great significance for promoting the intelligent development of agricultural management and can improve the overall level of China's facility agriculture. Has a broad potential application prospects.